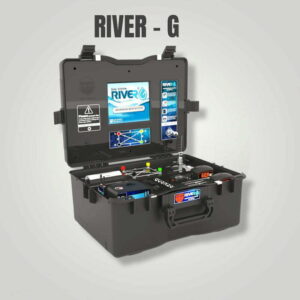 Description
After the tremendous success achieved by GER Detect in cooperation with UIG Detectors on the EASY WAY PLUS device, GER Detect has completely upgraded this device to help prospectors shorten time and distance in finding the target.
The world unique and only technology that combines two systems within one device.
Specialized in prospecting and searching for gold, precious metals, burials, caves, and voids inside the ground, with confidentiality and ease.
The smallest device with a radar sensing system and a 3D imaging system, completely concealable.

GER Detect has invented the first device of its kind in the world with a single handgrip radar sensor system.
A grip is highly effective with a radar structure characterized by the analysis of radar waves that measure a target’s characteristics.
In other words, it is a high-precision dual-frequency radar and a transmitter and receiver of the signals coming from targets.
A radar system with special and sophisticated algorithms integration to detect the location of the target, consistent ability to detect and measure small targets in the ground.
The front range in the long-range system can reach up to 2000 square meters, which equals 500 meters in each direction, it also can reach a depth of 18 meters in the ground.

This system is designed to avoid errors caused using the long-range system by the prospector and to confirm the existence of the target.
After identifying the target with the radar system, you can make scanning for the detected target with the 3D imaging system.
The EASY WAY SMART device has several characteristics:
This system is supported by an Android application that works in several languages, namely: (German – English – French – Italian – Spanish – Arabic – Portuguese – Russian).
Automatic calibration with soil.
Automatic ground scanning feature.
It reaches a depth of 18 meters underground.

Shopping cart
close
Start typing to see products you are looking for.
This website uses cookies to improve your experience. We'll assume you accept this policy as long as you are using this websiteAcceptView Policy